Seborrheic dermatitis is a chronic form of the condition known as eczema, and it will typically appear in the body where there are a number of glands which produce oil, some of which are located in the nose, scalp, and upper back. Scientists don’t know the precise cause of seborrheic dermatitis, but it is widely believed that genes and hormones are a factor in their formation.

A number of microorganisms which are commonly found on the skin will normally contribute to the development of seborrheic dermatitis. This condition can affect people at any age, and when it impacts an infant, it’s generally referred to as cradle cap. The age groups most commonly affected by it are those less than three months old, and adults between the ages of 30 and 60.

For adults, the condition is generally triggered by an illness, hormonal changes, unusual stress, harsh soaps or detergents, dry and cold weather, and sometimes medications. Those people who are most at risk for developing seborrheic dermatitis are those with compromised immune systems, people who have epilepsy, and those who suffer from alcoholism, rosacea, acne, depression, or eating disorders.

When treating cradle cap, any program of treatment will generally focus on loosening the scales and removing them, lowering the level of swelling and inflammation, and managing the itching which is sometimes associated with the ailment. If a person is bothered by a fairly mild case, some kind of topical antifungal cream, or possibly a medicated shampoo may be sufficient to manage symptoms.

If you have seborrheic dermatitis on the scalp, you should probably alternate between using your regular shampoo and one which is medicated, for instance a dadendruff shampoo. As your symptoms begin to subside, you can taper off with the usage of the medicated shampoo. When the condition occurs anywhere else on your body, you should wash daily with a cleansing agent that includes 2% zinc pyrithione.

After this you should apply a moisturizer to the affected area, which will soften scales so they can be removed eventually. As a further step toward softening scales, you can use any kind of cream which contains sulfur, coal tar, or salicylic acid. If you have a more intense case of cradle cap, your doctor may recommend a topical corticosteroid in addition to these other measures, so that swelling can be controlled.

Topical corticosteroids should only be used when you’re actually having a flareup of the skin ailment, but not in between times. In extreme cases of the condition, your doctor may recommend an oral antifungal agent, although this will not be for any prolonged period of time. 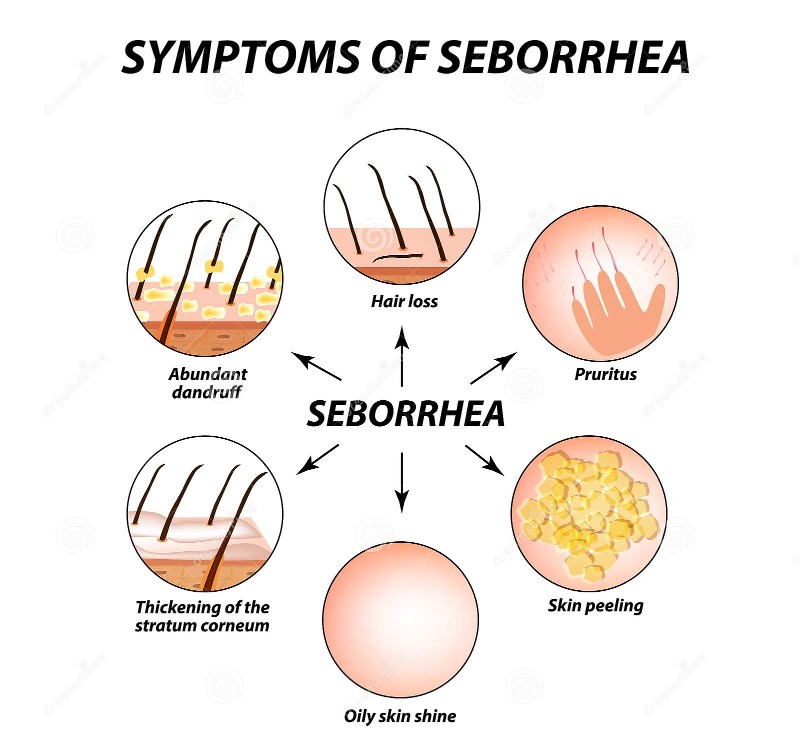 Seborrheic dermatitis often begins in infancy as an ailment known as cradle cap, which appears as thick, crusty scales. For the most part, children outgrow this condition by age three, and it doesn’t really develop into full-blown seborrheic dermatitis either as a teenager or during adulthood. It’s important to know that this ailment is not contagious and is not caused by poor hygiene. It’s also not a dangerous condition and it’s not an allergy.

If your baby has cradle cap, they probably won’t be too inconvenienced by it, because it’s not usually itchy at that stage. In those cases where it is itchy, excessive scratching may lead to additional inflammation, and possibly a mild infection. If you notice your child scratching their scalp in the area where yellowish, crusty scales are situated, you should alert your pediatrician to the fact so treatment can be administered.

The main issue with cradle cap is the oil produced by sebaceous glands and hair follicles, and people who are afflicted by this condition generally produce too much sebum, which is natural skin oil. After this excessive oil production, it’s very easy for yeast to grow excessively in the sebum, often in tandem with bacteria, to worsen the dermatitis situation. Keep in mind this is not a dangerous condition, and treatment for it is very easily administered. With a little bit of care and persistence, almost any case of cradle cap can be managed effectively.

Clear Up Your Baby’s Scalp Today

If your infant is bothered by cradle cap, the best thing you can do for your baby is to use a very effective product, a cradle cap brush called Bean-b-Clean. This product gently massages the scalp to help loosen and remove scales, and to reduce inflammation that might be troubling your infant. Contact us today to find out more about this wonderful product, and where you can purchase one to help resolve your baby’s issue with cradle cap.

This site uses cookies to improve your browsing experience; the website may not work as expected without them. By continuing to browse this site, you consent to the use of cookies.

We may request cookies to be set on your device. We use cookies to let us know when you visit our websites, how you interact with us, to enrich your user experience, and to customize your relationship with our website.

Click on the different category headings to find out more. You can also change some of your preferences. Note that blocking some types of cookies may impact your experience on our websites and the services we are able to offer.

These cookies are strictly necessary to provide you with services available through our website and to use some of its features.

Because these cookies are strictly necessary to deliver the website, refuseing them will have impact how our site functions. You always can block or delete cookies by changing your browser settings and force blocking all cookies on this website. But this will always prompt you to accept/refuse cookies when revisiting our site.

We fully respect if you want to refuse cookies but to avoid asking you again and again kindly allow us to store a cookie for that. You are free to opt out any time or opt in for other cookies to get a better experience. If you refuse cookies we will remove all set cookies in our domain.

We provide you with a list of stored cookies on your computer in our domain so you can check what we stored. Due to security reasons we are not able to show or modify cookies from other domains. You can check these in your browser security settings.

We also use different external services like Google Webfonts, Google Maps, and external Video providers. Since these providers may collect personal data like your IP address we allow you to block them here. Please be aware that this might heavily reduce the functionality and appearance of our site. Changes will take effect once you reload the page.