You are here: Home1 / Bean Blog2 / Mommy Tips3 / When Does Cradle Cap Go Away in Babies?

The majority of infants will go through a brief period where they are troubled by cradle cap, otherwise known as seborrheic dermatitis. This is not something you should be overly alarmed about, because in the majority of cases, it’s just a phase you’re infant is going through, and it will clear up all by itself. However, there are times when the condition can be more severe, and can last for a longer than normal period of time, and in these cases, you may want to consult your pediatrician for recommendations on how to accelerate the removal of the flakiness.

What is Cradle Cap?

Cradle cap is a very common condition which affects as many as 70% of all newborns within the first three months after birth. It appears as oily, scaly, or crusty patches on a child’s scalp, and they will look a lot worse than they actually are, in terms of any pain or discomfort to your baby.

These scaly patches are difficult to remove, but you can accelerate the process by taking some of the steps described below. These steps may help to loosen the scales so they can be removed more easily, but whatever you do, don’t scratch them or pick at them. You’ll be able to identify whether your child has seborrheic dermatitis by the patches of crustiness or scaliness on the scalp.

You might also notice the appearance of dry skin or oily skin which have flaky scales that are white or yellow in color. There are sometimes skin flakes that look like dandruff, or some mild redness that is localized to a particular section of your baby’s scalp. You may also find some of these same crusty patches on your baby’s nose, ears, or eyelids.

When Will Cradle Cap Go Away?

Most frequently, seborrheic dermatitis will clear up all on its own within a few weeks, and will completely disappear. At other times, it will persist in certain children, and may appear intermittently for up to a year after birth. While this is not the norm, it has been known to happen, and understandably, has triggered significant concern in the parents of an affected baby.

If your child’s cradle cap does not clear up within two months of its first appearance, you may wish to contact your pediatrician for advice on how to accelerate the process. There are some things you can do right at home which will have a definite impact on the condition, because it will help to loosen up the scales for easier removal. Keep in mind that anything you do at home should be done very gently, because the baby’s head is quite sensitive, and could easily become irritated if you do anything with too much force. 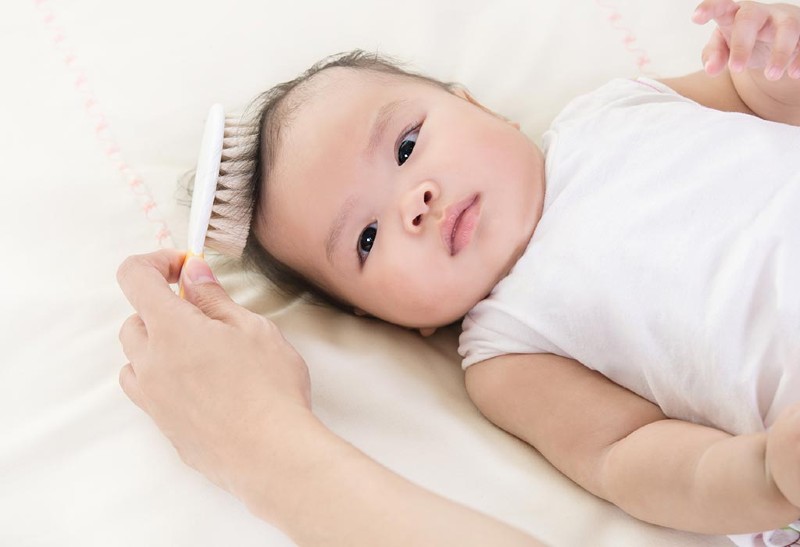 How Can I Make it Go Away Faster?

Even though it’s not medically necessary for you to actively take steps to intervene with seborrheic dermatitis to accelerate its removal, there are some things you can do at home to speed the process. Washing your baby’s hair daily will generally help, because that removes a lot of the oil which is present and contributes to the condition. Use a mild baby shampoo when you do this, and gently rub it into all affected areas. Make sure that you use a product that is considered safe for infants.

After you have shampooed your baby’s scalp, you can gently brush their hair with a special brush developed for this purpose. This will be a very soft brush which is designed to help loosen the scales, so they’ll fall off of their own accord. You’ll have to be careful to take very gentle strokes while doing this, so that you don’t irritate the scalp or pick at the scales. Some parents have enjoyed considerable success by lubricating the scalp with baby oil or some kind of ointment, and this also helps to loosen the scales so they will fall away more quickly.

Ease the Development of Cradle Cap

The condition known as cradle cap will generally clear up all by itself within a few weeks, and then generally will not return. However, for some babies, the situation can become a bit more severe or it can last longer than normal, and in these cases, you may want to take active steps to speed the removal of seborrheic dermatitis.

More frequent shampooing will generally help, and in this case it can be very effective to use a brush specifically formulated to be easily washable and reusable to loosen the scales. That is why we have invested years of research into the issue, and have developed the best possible brush for the scalp. The Bean-b-Clean cradle cap brush is easy to use, and easy to disassemble for cleaning and drying. Find a store near you that carries our brush to get your own, and speed the removal of cradle cap in your child.

This site uses cookies to improve your browsing experience; the website may not work as expected without them. By continuing to browse this site, you consent to the use of cookies.

We may request cookies to be set on your device. We use cookies to let us know when you visit our websites, how you interact with us, to enrich your user experience, and to customize your relationship with our website.

Click on the different category headings to find out more. You can also change some of your preferences. Note that blocking some types of cookies may impact your experience on our websites and the services we are able to offer.

These cookies are strictly necessary to provide you with services available through our website and to use some of its features.

Because these cookies are strictly necessary to deliver the website, refusing them will have impact how our site functions. You always can block or delete cookies by changing your browser settings and force blocking all cookies on this website. But this will always prompt you to accept/refuse cookies when revisiting our site.

We fully respect if you want to refuse cookies but to avoid asking you again and again kindly allow us to store a cookie for that. You are free to opt out any time or opt in for other cookies to get a better experience. If you refuse cookies we will remove all set cookies in our domain.

We provide you with a list of stored cookies on your computer in our domain so you can check what we stored. Due to security reasons we are not able to show or modify cookies from other domains. You can check these in your browser security settings.

These cookies collect information that is used either in aggregate form to help us understand how our website is being used or how effective our marketing campaigns are, or to help us customize our website and application for you in order to enhance your experience.

If you do not want that we track your visit to our site you can disable tracking in your browser here:

We also use different external services like Google Webfonts, Google Maps, and external Video providers. Since these providers may collect personal data like your IP address we allow you to block them here. Please be aware that this might heavily reduce the functionality and appearance of our site. Changes will take effect once you reload the page.

The following cookies are also needed - You can choose if you want to allow them: